Remember Marlin Perkins in Mutual of Omaha’s 1960s TV show “Wild Kingdom,” and how he left all the rhino-wrestling to his buddy Jim? To say nothing of Steve Irwin’s popular “Crocodile Hunter” forty years later. This post celebrates intrepid forerunner Martin Johnson, who broke trail for the likes of Marlin, Jim, and Steve.

Martin Elmer was born on October 9, 1884, to John and Lucinda Johnson, in Rockford, IL, where John, a Swedish immigrant, worked as foreman at a watch factory. Within a year of Martin’s birth, the Johnsons moved to Lincoln, KS, where Martin’s father then ran a jewelry store. They moved again in 1896, away from Lincoln which was crippled with drought, to Independence, KS, where John met with new success in selling jewelry and books.

Although his father taught him how to repair clocks and watches and details of the jewelry business, Martin’s mind was always on birds in the nearby woods and turtles basking on the river rocks. He constantly rebelled against both school and store. He frequently ran away from home, riding the rails and meeting hobos. When his father’s store expanded to include camera supplies, the boy became obsessed with photography as a means of escape to freedom from the workaday grind.

Young Johnson, upon expulsion from high school for photographic breaches in etiquette and protocol, embarked as an itinerant photographer. He met his future wife, Osa Helen Leighty, in 1902 when she was only eight. At the time, she was offended by the gawky teenager, ten years her elder, but neither did she quite forget him. She had taken her 3-year-old brother to the makeshift studio of this traveling artist, and was dismayed when the young man, who was developing his skill and his eye along with his images, insisted on mussing up the toddler’s hair for the expensive photograph, delighting little Vaughn but ruining Osa’s intent on a formal portrait.

When he came back to town – Chanute, KS – in 1910, his adventures drew Osa, and they eloped after a three-week acquaintance. In the intervening eight years, he had had a lifetime of adventure. He had worked on a boat to England, then stowed away on his return. He had sailed the Pacific with Jack London on that disastrous trip aboard the Snark (making the acquaintance of South Seas cannibals and headhunters), proving himself far better at ship operation and maintenance than at his job as cook.

The young couple worked at movie theaters and displayed his South Seas photographs on the vaudeville circuit for a while, but finally bit the bullet in 1917 when they invested everything they had in photography equipment and headed back to South Seas. They spent nine months visiting and filming wildlife and natives of the New Hebrides and Solomon Islands, including the fierce Big Nambas tribe of Malekula. Although warned against taking a white woman among these people (indeed, the local British garrison warned against anybody approaching them), both Martin and Osa forged ahead anyway, and Osa survived a baptism of fire that would have made most others, men or women, quail in terror.  Her gritty courage impressed both natives and British.

They returned to Malekula in 1919. They completely wowwed the Big Nambas when, with equipment and a generator, they showed the tribe the film they had made from footage on the earlier trip, Among the Cannibal Isles of the South Seas. The film technology displayed to the natives imbued the Johnsons with powerful medicine. From this second trip, which included a voyage by boat along the eastern coast of Africa, they produced two more feature films, Jungle Adventures (1921) and Headhunters of the South Seas (1922).

Martin and Osa’s attention now turned toward Africa. They ultimately made five expeditions there, between 1921 and 1934, ground-breaking, multi-year projects with immensely complex planning and execution. They worked in Uganda, the Serengeti Plains, and the Belgian Congo.

In between their multi-year safaris, they conducted national tours, lecturing, exhibiting their still photography and artifacts, and producing over fifty films and seven books about the wildlife and habitats of Africa and the South Seas. Their films were hugely popular throughout the United States.

Osa was the ultimate partner to Martin, coordinating the expeditions and running the camps, and guarding against wildlife attacks while Martin shot footage. She was a crack shot, providing game for the table as well as protection to the camp and crew. She remained cool-headed during attacks by lions, rhinos, and elephants. She quickly picked up a multitude of native languages, and filmed as well as developed footage with her husband, all with an indomitable, positive attitude which matched Martin’s adventuresome spirit.

About his wife Martin once stated, "For bravery and steadiness and endurance, Osa is the equal of any man I ever saw. She is a woman through and through. There is nothing 'mannish' about her. Yet as a comrade in the wilderness she is better than any man I ever saw."

In 1932, both Johnsons learned to fly, which expedited their expeditions considerably. They purchased two Sikorsky amphibious planes, Martin’s S-39-CS named “Spirit of Africa,” which sported giraffe spots, and Osa’s S-38-BS named “Osa’s Ark,” striped like a zebra. They were now able to collect aerial footage, the first ever of migrating herds on the African grasslands. 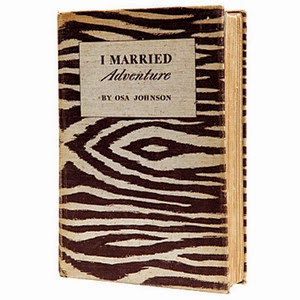 Sadly, while on their lecture circuit, the Johnsons were involved in a deadly plane crash in California on January 12, 1937. The commercial Boeing airliner, fighting foul weather, failed to reach the runway on approach. Martin died of his injuries the next day, one of five deaths, at age 52. Osa was also severely injured, but continued their schedule of lectures in a wheelchair once she was released from the hospital.

Osa continued their work after Martin’s untimely death. She wrote several memoirs, led more expeditions to Africa, wrote children’s books, produced more films, including one based on her memoir , and continued on the lecture circuit. At age 58, she died in 1953 in the midst of preparing to lead another African safari.

I read I Married Adventure a couple of years ago, and enjoyed the rich adventure thoroughly.