Charles Curtis crosses our path again, but this is not the Native American Vice President I wrote about last month.  This time, it’s Charles Gordon Curtis, who must have been camera-shy, for I find only a couple of photographs of him available online.
Charles Gordon Curtis was born in Boston, MA, on April 20, 1860. He received a degree in civil engineering in 1881 from Columbia University. He then received a law degree in 1883 from the New York Law School, after which he spent 8 years in patent law. His engineering interests superseded his law interests in 1891, when he left his law practice and organized the C&C Electrical Motor Company which manufactured electric motors and fans.
He was intrigued by steam power, and began studying the steam turbine design developed by Swedish engineer Gustav de Laval in 1882, as well as those of A. C. E. Rateau (French), and Charles A. Parsons (British). Curtis saw limitations in previous designs, primarily in velocity compounding, which was the loss in speed (and therefore power) of the steam as it passed from inlet to outlet, reducing the machine’s efficiency. Curtis believed that he could develop a model to circumvent this problem. He patented his idea in 1896, but then had to find some big financial backing to develop the machine. After refusals from several companies, Curtis finally received interest in 1897 from Edwin W. Rice, then vice-president of manufacturing and engineering for General Electric Company (an up-and-coming company that was incorporated only five years earlier). In the agreement between Curtis and G. E., Curtis received the facilities, resources, and staff to develop his steam turbine, and G. E. had the rights to manufacture it.
It took several models, several tests, and several years, with setbacks and failures typical to product development, before the first practical, commercially viable Curtis steam turbine came off the production line in 1901, under the supervision of William Le Roy Emmet, a newly assigned production engineer previously in charge of G.E.’s Lighting Department.
First, the Curtis 500-kW turbine was produced, followed by the Curtis 1500-kW, 5000-kW, and 15,000-kW turbines. Emmet developed and produced several models, many of which were still in use at various facilities throughout the country as late as 1990. The most efficient models were vertical, requiring one-tenth the space and weighing one-eighth as much as machines they replaced. Because these steam turbines generated tremendous power in a small space, they shoved into obsolescence the commonly used reciprocating steam engines previously available. They were foremost in stimulating the growth of modern electrical generation in large central stations nationwide.
Meanwhile, having met his commitment to G. E., Curtis went his way, and began work on the natural gas-powered turbine, which he patented in 1899 (Patent No. US 635,919). This was the first gas turbine design in the country, and Curtis soon had an efficient, functioning machine commercially available. (Only two gas turbine designs around the world preceded his, one in 1791 in England, and one in 1872 in Germany. Neither was developed into a successful machine.) Over the next thirty years, he continued to apply improvements to this generator, as well as to the steam turbine. He is also credited for developing the propulsion mechanism used for certain naval torpedoes, and held many patents for diesel-engine improvements.
Curtis consulted with many inventors and engineers of his day, including Thomas A. Edison and Hungarian-born mechanical engineer Paul Henry Schweitzer, who taught engineering at Pennsylvania State College from 1923 to 1980.
The website for The American Society of Mechanical Engineers states: “In 1910 [Curtis] was awarded the Rumford Premium by the American Academy for Arts & Sciences, for his improvement of the steam turbine. He received the first annual award from ASME’s Gas Turbine Power Division in 1948. In 1950 he received the Holley Medal from ASME, also for his gas turbine work.”
Curtis died at age 92 on March 10, 1953, in Central Islip, a community on Long Island, NY. (There is no information readily available online as to whether or not he left any family behind.)
SOURCES
Brittanica Online http://www.britannica.com/EBchecked/topic/147170/Charles-Gordon-Curtis
Answers.com: Charles Gordon Curtis  http://www.answers.com/topic/charles-gordon-curtis#ixzz1sEOyp3yB
Wikipedia: Gas Turbine  http://en.wikipedia.org/wiki/Gas_turbine#cite_note-2
ASME American Society of Mechanical Engineers: Charles Gordon Curtis: http://www.asme.org/about-asme/history/biographies/a-d-biographies/curtis,-charles-gordon
“The First 500-Kilowatt Curtis Vertical Steam Turbine, An International Historic Mechanical Engineering Landmark,” July 23, 1990, Indianapolis Power & Light Company, E. W. Stout Generating Station, Indianapolis, IN, The American Society of Mechanical Engineers, 345 East 47th Street, New York, NY 10017.
Smithsonian Institution Archives http://siarchives.si.edu/collections/
Photo courtesy of Wikipedia.
Patent sketch from U. S. Patent Office.
Posted by Brass Castle Arts at 6:07 PM 2 comments:

Early last evening, Easter Sunday, Charlie Grant, fifer and WWII veteran (among other things), went to his great reward, quietly and peacefully. I had visited with him a week ago Saturday, and found him ready to go, whenever the Lord decided to call him. He undoubtedly had a grand reunion last night with his beloved wife Elaine, whom he missed greatly after she passed away in 2006.  Charlie would have been 89 in two weeks.
Below is profile about Charlie which I wrote five years ago, published in the "Ancient Times" (a fife-&-drum quarterly) in 2008.  I hope you will enjoy this little tribute to an outgoing man with simple tastes and a keen ear for music.
It was a deep privilege for me that Charlie called me 'friend.' We met at the American Legion Post 208 in Millis, MA, on Memorial Day 2006, when he heard me playing the fife. Being a fifer himself, he was drawn to the sound like a moth to the flame. After that, I visited him often, gaining more from his friendship than I will ever realize.
Go well, my dear friend. 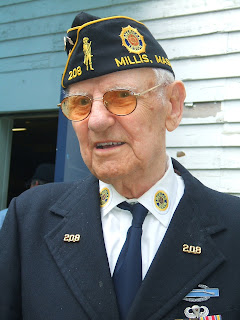