It was on the Ides of March in 1820 (191 years ago this week) that Maine became the 23rd of the United States, part of the Missouri Compromise. (This Congressional agreement between the pro-slavery and anti-slavery factions involved primarily the regulation of the expansion of slavery into the western territories. In a nutshell, Maine was admitted as a free state to balance the admission of Missouri as a slave state.)
Previously referred to as The Province of Maine or The District of Maine, the territory was part of the Massachusetts Bay Colony from its settlement in the earliest days of the 17th Century. Therefore, its territory was part of the original 13 colonies which won independence from Great Britain, but it was another thirty-seven years before it was established as a political entity separate from Massachusetts.
Although geographically as big as the other five New England states put together, Maine is 39th in size compared to the rest of the states in the Union. Most of it is only sparsely settled (the 40th most populous), its economic history having been dominated by rural industries - timber, granite, ice, lime, agriculture, fishing, and paper. Its current population stands a little over 1.25 million. It is the least densely populated state east of the Mississippi River. Four hundred of the 833 townships are unorganized territories, primarily paper company lands, which have never been settled. Maine is the only state in the Union to share a border with only one other state.
Although its etymological origins are obscure, some historians believe that the name “Maine” refers to the early island culture along the coast. The islands were settled first, with growing populations later moving onshore to the mainland, or “main.” Other documents indicate other origins, including the largest of the Orkney Islands in Scotland which is called Mainland. Whatever its origins, the name “Maine” was officially fixed on the region in 1665 on land grant records prepared by British commissioners working in the name of King Charles II.
Even after the famous Webster-Ashburton Treaty of 1842, which finally established the boundary between Canada and the United States in the State of Maine, the ownership of a few remote Maine locations continues to be contested. Machias Seal Island and North Rock off Maine’s easternmost point fall into this dual claim. But the two nations have rarely exchanged fisticuffs over these locales. Indeed, the neighboring communities divided by the international boundary have fostered community cooperation for centuries, despite any international disputes which have divided their federal centers of government.
Calais, Maine, USA, and St. Stephen, New Brunswick, Canada, share this international border way Down East. The War of 1812 came about when Great Britain (of which Canada was a colony) and the United States came to loggerheads over the impressment of American sailors into the British Navy, among other issues. Because Calais is a border community which could be an important stronghold against an invasion of the British from eastern Canada, the federal government sent arms, ammunition, and other military supplies to the town authorities in Calais, for its defense against such an invasion.
The town fathers welcomed the supplies, for this recognition boosted their political status in far distant Washington City. But they had no arsenal in which to store the munitions properly.  St. Stephen, however, across the river in Canada, had an arsenal. The town fathers of Calais discussed the situation and decided that no matter how angry London and Washington might be with each other, residents of Calais and St. Stephen had a neighborly relationship which succeeded because they supported each other. The two communities, in a very remote locale, were closely linked economically and culturally. War or no war, they had to live with each other.
So the town fathers of Calais crossed the international boundary and consulted with the town fathers of St. Stephen. They asked if they might store the federal military supplies in the St. Stephen arsenal. The town fathers of St. Stephen listened to their reasoning, and agreed with it.  There was no indication that the war would come close to their communities, 665 miles from Washington and 3000 miles from London.
And thus it came to pass that Calais stored its federal-issue arms in enemy territory for the duration of the war. St. Stephen and Calais were so friendly that St. Stephen supplied Calais with gunpowder for its Fourth of July celebrations. When the war ended, the town fathers of St. Stephen allowed the town fathers of Calais to reclaim the supplies in order to return them to Washington.
This kind of independent thinking, relying and acting more on the knowledge of one’s immediate environment contrary to the incomplete ideas of an authority far removed from the situation, has been typical of the Maine people since the earliest days of settlement. It is a form of innovation, that pioneer spirit which breeds success under often adverse conditions. It’s part of what makes me proud of my home state.
SOURCES
Wikipedia  http://en.wikipedia.org/wiki/Maine
Wikipedia  http://en.wikipedia.org/wiki/St._Stephen,_New_Brunswick
State Map: Merriam-Webster’s Atlas, Merriam-Webster Online  http://www.merriam-webster.com/cgi-bin/nytmaps.pl?maine
Bird’s-Eye View Map: Some rights reserved by Norman B. Leventhal Map Center at the Boston Public Library http://www.flickr.com/photos/normanbleventhalmapcenter/
Posted by Brass Castle Arts at 12:41 AM No comments: 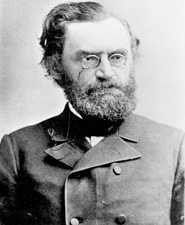 This week celebrates the 182nd anniversary of the birth of Carl Schurz.  The name of Carl Schurz means little to most Americans today, but one hundred years ago, it was synonymous with integrity. This German immigrant advised presidents from Lincoln to Theodore Roosevelt, and his power and public voice were such that those who would take advantage of the system for personal gain thought twice. During his 54 years on American soil, during the latter half of the 19th Century, Schurz became the nation’s leading political advocate for human rights, corruption-free government, and principles.
Born near Cologne, Germany, on March 2, 1829, Schurz’ mission in life soon became human rights. His passion for history and literature, and his mastery of debate supported this mission throughout his life. He became a leader in the rabble which challenged (unsuccessfully) King Wilhelm of Prussia in 1848 for the institution of a constitutional government with the popular vote. Escaping capture at the collapse of the movement, he became a fugitive, and after a few years in London, he immigrated to the United States with his new wife Margarethe, having determined that the Old World culture of Europe could never provide the hope and future offered in the New World.
Once in America, Schurz taught himself to read and write English within a few months, and began lecturing to fellow German-American immigrants about American policies and issues affecting this population. His ability to articulate what they could not themselves express made him very popular, and in short order, he found himself employed using words professionally, polishing his passions and opinions on current affairs into intelligent and thoughtful essays, pamphlets, and editorials. This work soon launched him onto the national stage.
Besides his private professions as a lawyer, editor, author and biographer, Carl Schurz served capably in many public capacities: ambassador, brigadier general, senator, cabinet member, and advisor to eleven presidents, no small feat for one man in only half a century. He was a peerless statesman, in every admirable sense of the word. His participation in public issues illustrates what an immigrant can do - what anyone can do – with hard work and determination. He was wholeheartedly an American.
He and Margarethe, who introduced the kindergarten to the United States, had five children. His two older daughters, Agatha and Marianne, by their own choice never married. After Margarethe died, the girls cheerfully served their father and managed the household and Carl’s business affairs, despite his admonition to go out and meet young men. They raised the two younger boys, Carl Lincoln Schurz, and Herbert. (A third daughter, Emma, had died as a toddler.)  Herbert died quite suddenly in England just after graduating from college. Carl’s son Carl Lincoln married, but had only one stillborn child. Therefore, this line of the Schurz family ended when Marianne died in 1929.  Agatha and Carl Lincoln Schurz preceded her in 1915 and 1924, respectively.  Incidentally, Carl Lincoln’s birthday celebrated its 140th anniversary this week, on February 28, 1871. The younger Schurz was a notable lawyer.
Carl Schurz died in New York City at age 77 on May 14, 1906, after a short bout with pneumonia. His autobiography, The Reminiscences of Carl Schurz, was incomplete, but even incomplete, it amounted to three volumes in publication.
Schurz blessed us with many significant quotations, the most well-known of which is an adaptation of Stephen Decatur’s patriotic toast: “My country: right or wrong.”  At first glance, this seems blind faith, but Schurz’ complete quote illustrates his clear-sighted devotion to and practical application of American ideals: “My country, right or wrong: if right, to be kept right; if wrong, to be set right.”
If you would like to read a more comprehensive article about Carl Schurz, please click here. Neither this short blog posting nor the attached longer article can begin to credit Carl Schurz properly, but perhaps one or the other of these will serve to reintroduce a remarkable man to the American public. Even today, all of us could learn much from Carl Schurz.
SOURCES
Terzian, James P., Defender of Human Rights, Carl Schurz (New York: Julian Messner, Division of Pocket Books, Inc., 1965)
“An Evolving Family Tree for Carl Schurz” http://homepage.mac.com/pannier/schurz
Terzian, James P., Defender of Human Rights, Carl Schurz (New York: Julian Messner, Division of Pocket Books, Inc., 1965)
Biographical Directory to the United States Congress http://bioguide.congress.gov/scripts/biodisplay.pl?index=s000151
Posted by Brass Castle Arts at 3:34 PM No comments: