SEPTEMBER IS ANOTHER BLACK HISTORY MONTH

This month in 19th Century American history features many events of significance in the heritage of African Americans. 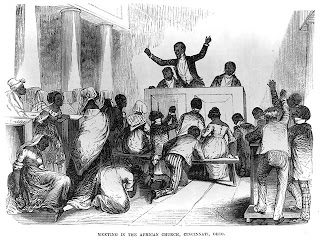 On September 15, 1830, the first Negro Convention of Free Men convened in Philadelphia, PA, with a mission to identify problems to the black race in the United States and to establish practical measures to counter them.  Five days later, this convention voted to boycott the products of slave labor. Conventions like this continued nearly annually through 1864, then irregularly after that. In 1853, Frederick Douglass presided over the convention. The following year, Martin R. Delaney, editor of the anti-slavery paper The North Star, presided.

Initially, the convention developed as a platform from which to contest the American Colonization Society, a white organization founded in Washington, DC, whose mission was to relocate black slaves to a new colony in Africa. (This was partially effected, the end result of which was the establishment of the Republic of Liberia in 1847.) These black abolitionists believed that the motive behind the ACS was to cleanse the United States of the black race, to make the nation all white.  Although the black caucus was divided over overseas colonization vs. domestic integration, many black leaders remained firm in their belief that the black race had earned its right to remain on American soil. Over time, many who had supported colonization joined the home-soil movement.

Another purpose of these conventions was to develop practical strategies to improve the lot of the black race in America. The leaders promoted the establishment of economic, educational, social, political, and cultural institutions to provide the black man with tools with which he could prosper, and ultimately to prove to the American white man that he was capable of managing his own life and affairs, with an eye toward recognition as a citizen and all of the rights and responsibilities which that entailed.

On September 20, 1850, the slave trade was abolished in Washington, DC.  The institution continued within the city limits, but the buying and selling of slaves there was over. Perhaps Lincoln’s unsuccessful legislative effort in 1849 (when he was a US Representative in Congress), which proposed to end slavery in the District of Columbia with monetary recompense to slaveholders, served as fodder for this partial act a year and a half later. In 1862, Lincoln, as President, signed into law another bill which effected the results he had promoted in 1849. The 1862 law abolished slavery in DC, paying District slave owners for their investment. 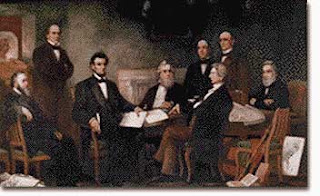 On September 22, 1862, Lincoln issued the final draft of his Emancipation Proclamation, freeing the slaves within the rebelling states, a military measure which Lincoln hoped would undercut morale among Southern troops. It also gave black Americans the opportunity to fight directly for their own freedom.  After the Proclamation took effect on January 1, 1863, more than 200,000 blacks enlisted and fought for the Union, constituting about 10 percent of the Union army.

Ultimately, the Thirteenth Amendment to the Constitution, which eliminated slavery, was approved by Congress in January 1865 and ratified by three-quarters of the States by December 1865, with complete ratification by 1870.

After the Civil War, these National Black Conventions remained true to the interests of African Americans, the platforms changing to reflect emerging issues for blacks in America, including Reconstruction, the labor movement, and civil rights.

9/13/1886     Alain Locke is born in Philadelphia, PA. The first black Rhodes scholar, he becomes a writer and philosopher, and is called the “Father of the Harlem Renaissance.”

9/23/1863     Mary Church Terrell, a black educator and activist is born in Memphis, TN. In 1896, she becomes the first president of the newly formed National Association of Colored Women. In 1904, she attends the International Congress of Women, the only black in attendance, and as the guest speaker, gives her address in English, French, and German.

9/24/1825     Frances Ellen Watkins Harper is born in Baltimore, MD. A black writer and feminist, she introduces the tradition of African American protest poetry.


This engraving from the April 30, 1853, edition of the Illustrated News shows the congregation of Cincinnati's African Church.  (From the collections of the Library of Congress)  http://www.pbs.org/wgbh/aia/part3/3h88.html 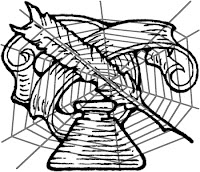 Yes, I know, I've neglected my blog recently. I've been quite busy (as if no one else is!). September is always crazy around here, and we don't have time to go to the bathroom. But I want to settle down and get back to regular posts. I do enjoy researching and writing them.

This message will be followed very quickly by my latest post. Stay tuned!
Posted by Brass Castle Arts at 11:48 PM No comments: