I’m sure you gardeners and salad lovers are relieved to receive this news as you water and weed your tender young plants to encourage a robust crop of these downright voluptuous fruits.
Yes, they are fruits, botanically speaking, because they are the ripened, seed-bearing ovaries of the plant.  In 1893, the Supreme Court ruled, however, that they are vegetables, because they are consumed like vegetables as part of a main meal, as opposed to a fruit’s use as a dessert staple.
We all have heard about the mixed reactions to the tomato that Europeans and North American colonists had for centuries.  Some folks ate them and enjoyed them thoroughly, and some folks believed them poisonous and refused to let them anywhere near the table.  Others believed that they had medicinal value but only if ingested in tiny, highly controlled amounts, and then only after cooking for several hours.  It’s not uncommon for people to discern that some things, although poisonous in larger quantities, are beneficial in small doses.
That many people believed tomatoes to be poisonous was not stupid.  Tomatoes are in the plant family Solanaceae, home to the deadly nightshade and many other poisonous plant genera.  Besides that, the foliage of the tomato plant, containing sulfur, smells bad, reminiscent of poison.  But many members of the nightshade family are cultivated for many uses, edible and otherwise, including potatoes, tomatillos, bell (sweet) and chili peppers, eggplants, paprika, tobacco and petunias.
Like the potato and others of this family, the tomato’s Western discovery was made by Spanish explorers like Cortez and Pizarro, who found nightshade plants of many species cultivated in the native gardens of the peoples of South America and Central America, tomatoes specifically by the Incas of Peru.  The Inca word for what we call the tomato was “tomatl.”  At that time, the tomato was a small, cherry-sized fruit of a golden yellow color.  The Spaniards brought the seeds back with them to Spain, and they spread throughout Europe from there.

French botanist Joseph Pitton Tournefort (1656-1708) gave the tomato its Latin botanical name - Lycopersicon esculentum. "Lycopersicon" translates to "wolf peach" - "peach" because it was round and luscious and "wolf" because it was erroneously considered poisonous, harking back to a fruit referred to in the 3rd Century which was purportedly used to poison wolves.
The Italians took most heartily to the new fruit, calling it “pomi d’oro” - golden apple, and incorporated it into their cuisine more inseparably than any other European culture.  It may be that the French should take credit for promoting its reputed aphrodisiacal properties believed by some, thus naming it “pomme d’amour” - love apple.  The English adopted the plant and fruit as an ornamental, and it was probably in this capacity that it was re-introduced into the Americas, with the English colonists, in a decorative capacity, not for culinary purposes. Thomas Jefferson had none of the English culinary qualms. He delighted in cooking and bringing new things to the dining table. He grew tomatoes both at Monticello, his home in Virginia, and at the White House during his presidency. 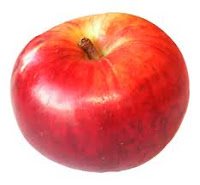 (The word “apple” is something of a generic term for fruit in many early languages - “pomme de terre” in French translates directly as “apple of the earth,” and the apple in the Garden of Eden was most likely a pomegranate - “apple punic.”  Indeed, the Oxford English Dictionary devotes a whole page - 3 columns - to its definitions, one of which is that the apple is an object of great value, another of which indicates a more generic application of the word to all fruit.  The apple figures largely in many mythologies, too.)
A brief internet search did not reveal to me when the red fruit was cultivated - the Italians’ passion for it may have spurred this variation; by the same token, because the English valued it as an ornamental, they may be responsible for the cultivation of its color variation to red.

Some sources indicate that the Puritans despised it because it was red and because of its shape suggestive of - I dare not say! It was obviously a product of Satan.  And it was succulent besides - !  What sin!
Anyway, back to our story and why June 28, 1820, is so important in tomato history: actually it isn’t. A lot of “this day in history” sites list today as the day that the tomato was proved to be non-poisonous, but the story is mostly a fable.
According to the stories, a man named Col. Robert Gibbon Johnson from Salem County, NJ, consumed a quantity of ripe tomatoes on this date before an audience, in an effort to prove to his neighbors that tomatoes were not only edible but also delicious, and worthy of commercial cultivation.  Johnson was a real person (1771-1850), and was a notable figure in the region, but according to Andrew F. Smith, researching and writing for the Oxford Symposium on Food and Cookery 2000, no written records exist for such a demonstration. If such a shocking and heavily attended event was publicized and took place, certainly there would have been reports of it at the time.  The story did not appear, however, until 86 years after the supposed event.
As speculated by Smith, the story had appeal and took on a life of its own.  An internet search brings up many versions of it, with some fantastic embellishments:
Johnson ate two pounds of tomatoes; Johnson ate a basket of tomatoes; Johnson ate a bushel of tomatoes. (If Johnson ate a bushel of tomatoes at one sitting, he would have got sick, but it wouldn’t be the fault of the tomatoes.)
Johnson ate the tomatoes in the public square; Johnson ate them in front of the courthouse; Johnson advertised in the papers that he was going to eat the tomatoes at the top of the steps of the county courthouse.
Johnson ate the tomatoes in Salem County, New Jersey, where he lived.  Johnson lived in Salem, Massachusetts, and ate them on the county courthouse steps there.
Twenty doubting Salem County residents gathered to watch this suicide attempt. No, actually 2,000 gathered for this horrific display.  To be more accurate, 20,000 people witnessed the blood-curdling drama. A woman in the crowd fainted at the ghastly sight of tomatoes slipping so easily, so evilly, down Johnson’s throat, and the local fire department band played a dirge.
Johnson ate the tomatoes on June 28, 1820.  He ate them on June 28, 1830.  He ate them on September 28, 1820.  He ate them on September 28, 1846. (It seems likely that if Johnson ate any tomatoes, he ate them in September.  In New Jersey or Massachusetts, tomato plants are still in the blossom stage in June, and the fruit isn’t ripe enough to eat until August and September.)
This fable reminds me of the gossip game “Telephone.”  Who knows why this story took off and suffered story bloat the way it has? It’s a grand illustration about why we need to look to original sources for the facts of any story. The little statement about the proof and its date caught my interest. It turns out that there’s no meat to the story; the truth here is no more substantial than the air in a balloon.
But I did have a fun little run with it, didn’t I? May the summer sun and rains yield you bushels of fat, juicy, voluptuous tomatoes.
SOURCES
What’s Cooking America http://whatscookingamerica.net/tomato.htm .
About.com: Home Cooking http://homecooking.about.com/od/foodhistory/a/tomatohistory.htm .
Wikipedia http://en.wikipedia.org/wiki/Solanaceae .
The Worldwide Gourmet http://www.theworldwidegourmet.com/products/articles/tomato-history/ .
Food History News/The De-Bunk House http://www.foodhistorynews.com/debunk.html .
“The Invention of Culinary Fakelore and Food Fallacies” by Andrew F. Smith, Proceedings of the Oxford Symposium on Food and Cookery 2000.
“Thomas Jefferson’s Favorite Vegetables” by Peter J. Hatch, Thomas Jefferson Society.
Oxford English Dictionary.
"The Health Benefits of Tomatoes" http://www.squidoo.com/tomatoesandhealth?utm_source=google&utm_medium=imgres&utm_campaign=framebuster
Posted by Brass Castle Arts at 8:47 PM